This is super simple bread recipe for first time bread bakers who may intimidated by typical bread recipes. It’s seriously so easy but ends up so good that it feels like cheating. I don’t even buy rustic bread anymore. I just make it! It’s a super versatile recipe inspired by Mark Bittman’s No Knead Bread, which has evolved over the years. This is slightly simpler and incorporates whole grain flour. You do need to let the bread rise for 12-24 so plan accordingly, but other than that it’s just a few steps. You also need a six- to eight-quart Dutch oven for this or else a heavy, covered iron, ceramic or Pyrex pot that acts like its own little bread oven in your oven. 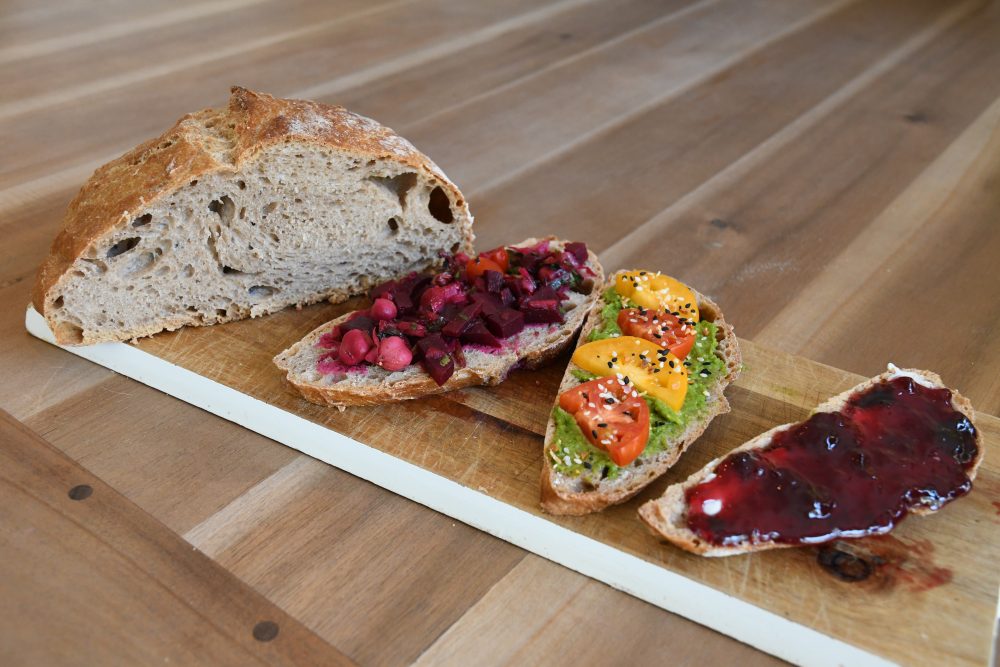 What did you think?

A slice of this bread (about 1/10 of the loaf) has more than 10% of the fiber a 1-3-year old needs. Thanks to whole grain and enriched flours, that slice also supplies around 20% of a 1-3-year old's iron and zinc needs along with plenty of B vitamins.

Lightly flour a surface and turn the dough out onto it and fold it over on itself a couple of times and roll it around in the flour once or twice until it forms a round ball or log shape, as you prefer. Sprinkle some flour into the bowl and return the dough back to the bowl. Cover it with a cotton dish towel and let it rest in a warmish spot like on top of the oven for thirty minutes while pre-heating the oven at 450 degrees.

Meanwhile, place the Dutch oven with the cover on it into the oven to heat up for those thirty minutes of oven pre-heating. You want it nice and hot. (If you are using a Le Creuset Dutch Oven with a black knob on the cover, be sure to place it on a lower rack so the knob doesn’t overheat and crack.)

After thirty minutes, carefully remove the Dutch oven from the oven, uncover it (it might smoke and that’s ok—don’t get your knickers in a knot!) and plop your bread dough in there. Put the lid back on and bake it in the oven for 30 minutes, then take the lid off and bake it for another 15 minutes until it’s lovely and golden brown. Remove the loaf to cool on a rack for a few minutes, then slice and serve.

Please note that comments need to be approved before they will appear on the site.